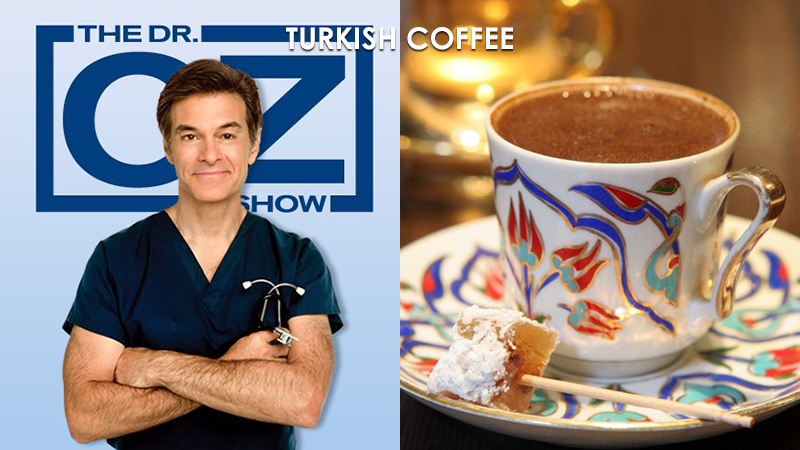 Posted at 08:32h in Opinion by NilTaskin
0 Likes
Share Istanbul was introduced to coffee in 1543 and World’s First Coffee Houses opened in Istanbul in 1554.

Two times I met with Dr. Mehmet Oz. first in a press conference in Istanbul, and then in Lexington Ave. NY, a few years before. I read his several books. His books are useful, giving some practical advice for your health and sound logically. And sure Lots of Turks likes him and proudly follow his successes.

Ok I can understand that commercial reasons. But isn’t he at least a little bit irritated to see a Greek talking about “Turkish Coffee” but calling it as Greek Coffee? As an Anthropologist I am always curious about origins of all foods, how they domesticated, where they discovered first, how they traveled around the world. Even in college we studied this. There is a few books about it, but not good enough.

For that “Turkish Coffee” episode unfortunately Dr. Mehmet Oz lost his sympathy for many of us.

I am not talking just because I am Turk but for the world culture, we need to know and remember that kind of information truthfully.

In my old neighborhood Astoria all around me was naturally full of Greek Cafés, which is good. Sure we’re sharing similar culture and same taste for food. And as we know all they’re serving Turkish Coffee as Greek Coffee. All the time when I visit them, I ordered Turkish Coffee and they never made me tell them twice, always my order on my table as Turkish Coffee.

As we know after Cyprus War, they didn’t like to hear the word “Turk” and they start to call “Turkish Coffee” as Greek. And in a short span of 30-40 years they have placed the name. However if anybody is going to call anything as Greek Coffee it only should be “Frappe”. If you visit Greece someday, you will understand what I mean.

READ:  Freedom to Live in a Secular Society

Istanbul was introduced to coffee in 1543 during the reign of Sultan Suleiman the Magnificent by Ozdemir Pasha, the Ottoman Governor of Yemen, who had grown to love the drink while stationed in that country. Coffee soon became a vital part of palace cuisine and was very popular in court. Istanbul’s first coffeehouses opened in the district of Taht-ul-kale in 1554.

Europeans got their first taste of coffee in 1615 when Venetian merchants who had become acquainted with the drink in Istanbul carried it back with them to Venice. At first, the beverage was sold on the street by lemonade vendors, but in 1645 the first coffeehouse opened in Italy.

England first became acquainted with coffee in 1637 when a Turk introduced the drink to Oxford. It quickly became popular among students and teachers who established the “Oxford Coffee Club”. The first coffeehouse in Oxford opened in 1650 and was called the “Angel”.

Paris was introduced to coffee in 1669 by Hossohbet Nuktedan Suleyman Aga, who was sent by Sultan Mehmet IV as ambassador to the court of King Louis XIV of France.

Coffee was introduced to Germany in 1675. The first coffeehouses opened in 1679-1680 in Hamburg, Bremen and Hanover.

Coffee reached North America in 1668. The first coffeehouse in New York, “The King’s Arms”, opened in 1696.

– Turkish Coffee is the world’s oldest coffee brewing method and a specific way of preparing coffee. It is common throughout Middle East, North Africa and Balkan countries, brought there by the Ottoman Turks.

READ:  ISTANBUL The Scene of INFERNO

– Turkish Coffee is the only coffee that can be boiled.

– Turkish Coffee is healthy as the grounds that settle at the bottom of the cup are not drunk.

– Turkish Coffee is the only coffee that can be used to predict the future. Cafedomancy: The use of coffee grounds to cast fortunes.

– Coffee have a really huge place in Turkish Culture; literature, songs, social life, traditions, etc. How is tea in Japan or a kind of in British Culture, Coffee is same for Turkish Culture.

Neither coffee nor the coffeehouse is the heart’s behest,
The heart seeks friendship, coffee is a pretext.
– Turkish Proverb

What I Appreciate and Pray..
Read in The Name of Your Lord
Christmas, Santa Claus and a Little Girl
Man-Desperate Woman / Desperate for Love...